COLCHESTER – State Representative Irene Haines (R-34) toured Hop Culture Farms & Brewery and Priam Vineyards to learn more about their businesses and how they are impacted by state regulations.

I was eager to learn how different local producers interact with state regulations and see how recent legislation to streamline our liquor control laws are impacting their operations for better or worse,” said Rep. Haines.

During the 2019 regular session, the General Assembly passed Public Act 19-24, “An Act Streamlining the Liquor Control Act.” The omnibus legislation was passed with the intention of modernizing and rationalizing state regulations to accommodate craft breweries, cideries, and farm wineries.

The tour began at Hop Culture Farms on Cato Corner Road with owners Heather and Sam Wilson. They started their business in 2016 growing hops and are now one of the largest hop growers in the state. In April this year, they started an on-site brewery a renovated post and beam structure from the early 1900s.

Rep. Haines commented, “Local and craft breweries are growing across the state. It was very informative to learn about how Heather and Sam started their hop farm and opened their brewery. It’s exciting to see a new generation getting into agriculture and helping preserve open space as a viable business.”

In between the visits, Rep. Haines toured Yankee Cider Co. in East Haddam.

The business tour concluded at Priam Vineyards on Shailor Hill Road with co-owners Gloria Priam and Jim Melillo. Gloria and her former business partner purchased the land in 1998 and began planting the vineyard and opened in 2003 after obtaining state and federal licensing. Today the 40-acre vineyard sells a wide variety of wines that have been recognized nationally and internationally. 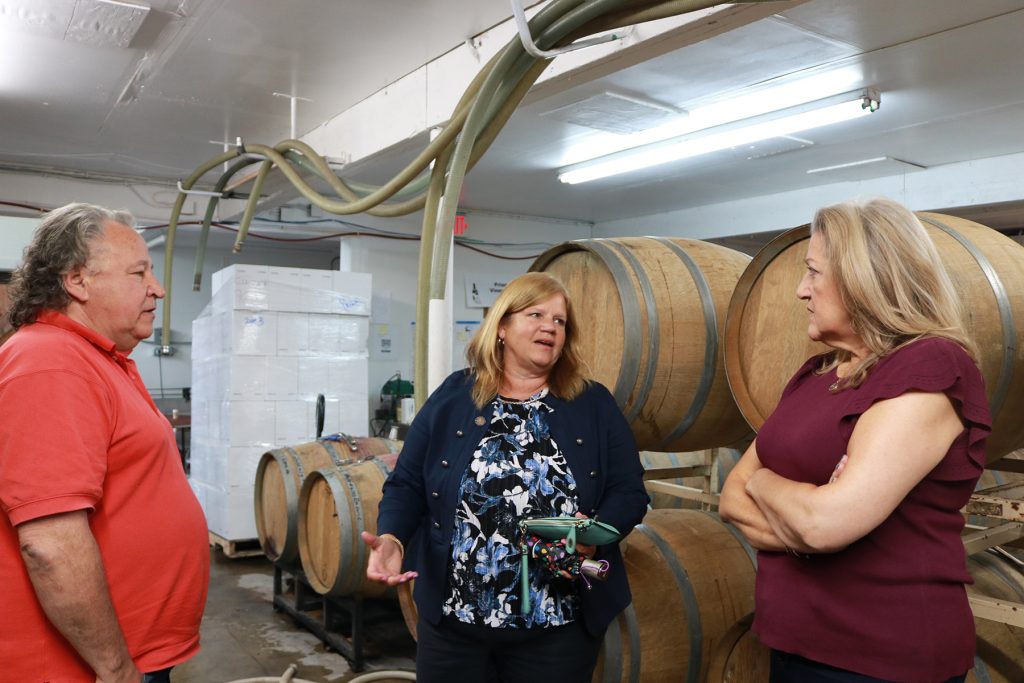 “I was truly impressed by their operations and efforts to grow their business. They have made tremendous investments in producing a Connecticut grown product that has won awards at national and international tastings,” said Rep. Haines. “Gloria and Jim were also a wealth of knowledge and identified potential problems in the new legislation that reduced the distinction of farm wineries lowering the requirements for Connecticut grown content.”

Priam Vineyards is open Wednesday through Sunday from 11 a.m. – 6 p.m. for more information visit their website at www.priam-vineyards.com.